Once the full set of measurements has successfully been taken, Dirac Live has the acoustical information it needs about your loudspeakers and listening room to create the correction filters.

The Filter Design tab shows the frequency response of one or two channels and the target curve. The following example shows the left channel in mauve and the default target in yellow/black: 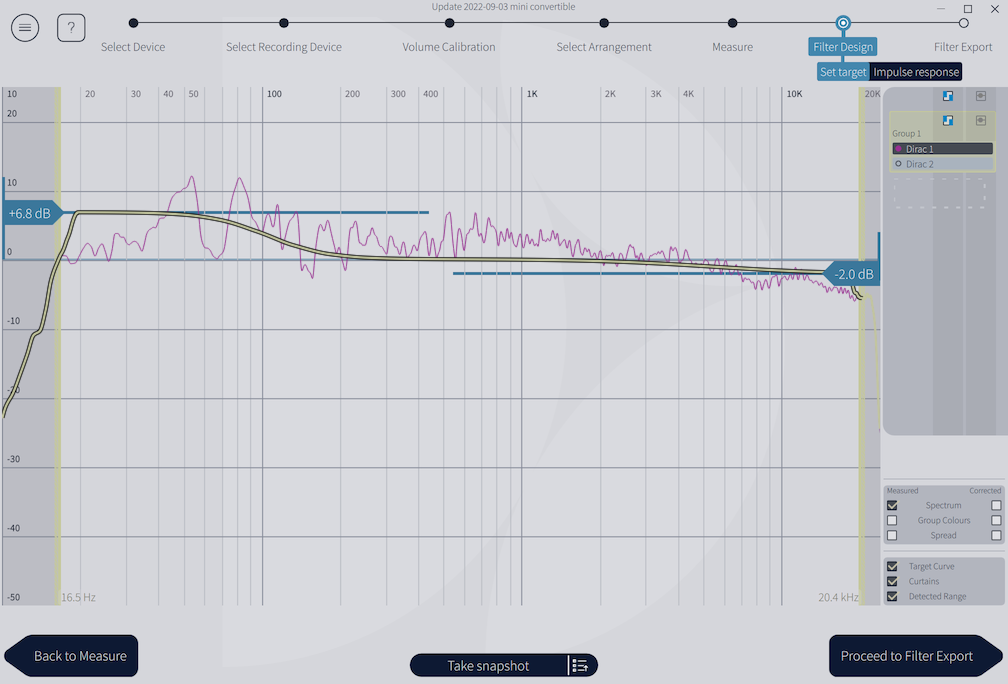 The target curve – shown in yellow in the above graph – is the response you desire from the speakers after correction. This will be an average of different locations around the listening area.

The default target curve provides two main controls: the bass shelf, and the treble roll-off. Simply grab the horizontal lines to move the level of the bass shelf and degree of treble roff-off (or gain, if you desire).

The grey regions to the left and right of the graph are excluded from magnitude correction. You can adjust the frequency range of correction by dragging the "curtains" to either side of the graph.

For example, you may not wish to correct the bass to such a low frequency, so drag the left curtain up to, say, 30 Hz. Or, you may be happy with the inherent in-room response at higher frequencies, so you can set the upper curtain frequency region to limit correction to the modal region (up to 300 Hz, in a typical room). Dirac Live

There are two channels listed towards the top right of the window, in a single group:

Each group has its own target curve and range curtains. If you wish to have different target curves for left and right, you can separate the two channels into separate groups. To do this, click on "Left" or "Right" and drag it out of the darker box.

Zooming in on the graph¶

The graph can be zoomed in and out by using the mouse wheel, or with zooming gestures on a touchscreen. To move a zoomed graph, left-click and drag with the mouse, or use the grab and move gesture with a touchscreen. To zoom out to 100%, double-click on the graph.

If checked, the graph colors are the same for all channels in a group. This can be individually selected for the measured and corrected responses.

Display the range of corrected responses as a lighter highlight on the graph. For example:

This can be individually selected for the measured and corrected responses.

Display the target curve for the displayed group.

Display the correction frequency range for the displayed group. This is shown as "curtains" to the left and right of the graph.

Display two cursors indicating the frequency range within which Dirac Live has determined the speakers to have reasonable output. Note: at low frequencies, environmental noise can cause this estimate to be incorrect.

The target curve is converted to the equivalent but with control points, shown as dots on the target curve. The curve can then be edited as shown here:

To switch between the shelving controls and the control points, use the icons located with each group on the right side of the window:

You can save the current set of groups, target curves and curtain frequencies by clicking on the Take snapshot button:

Snapshots will by default be named as the current time. They can be renamed for easier selection later on. Click on the right side of the button and then on the pencil-shaped icon. Enter the name and press the Enter key:

It is not currently possible to delete a snapshot.

To reset a target curve and the range curtains to the default, drop down the menu from the hamburger icon and select Set default target curve, then select the group to reset:

Target curves can be saved and loaded individually for use at a later time or in other projects. To save a target curve, drop down the menu from the hamburger icon and select Save target curve, then select the group:

Care should be taken to create a target curve that works well with your speakers and room, as well as suiting your personal preferences. Small changes to the target curve can have significant effects on the tonal quality of the system, so it is important that you experiment with different target curves.

If you initially don't achieve a satisfactory result, ensure that you have spread your measurements over a sufficiently large area and with sufficient variation in height. The following guidelines will help you understand how to adjust your target curve.

All loudspeakers have a natural low frequency roll off. Setting the target curve to boost the region below the speaker's natural roll off frequency may result in overdriving the speakers, especially with smaller home loudspeakers and depending on your listening habits. A system with capable subwoofers integrated into it, however, will support much more low-frequency output.

The target curve is the desired measured response of loudspeakers in a room, in contrast to measurements made of a loudspeaker during its design under anechoic (measured in free space) conditions. While high-quality loudspeakers are usually designed for a flat on-axis anechoic response, these same speakers when placed into a listening room will tend to have a downward-sloping or "tilting" response at high frequencies, due to the effects of limited dispersion at high frequencies and greater acoustic absorption.

A completely flat in-room response is therefore usually not desirable and will tend to sound thin or bright. Start with a target curve that follows the natural behavior of your speakers in your room, and then experiment with greater or lesser degrees of tilt in the treble region to obtain the most natural timbral balance.

A completely flat response at low frequencies, with complete elimination of peaks due to room modes, may sound light in the bass. Typically, a slight increase in the target curve below 100 Hz will give a more balanced sound.

In some cases, it may be helpful to adjust the target curve to follow dips in the measured response. This can occur where, for example, the listening area is very close to the speakers and the measurements exhibit a dip caused by the vertical response of the speakers themselves. Experiment with a target curve that follows the dips. You may also wish to try a different set of measurement positions.

The Filter Design menu can be used to display the impulse response:

If checked, the graph colors are the same for all channels in a group. This can be individually selected for the measured and corrected impulse responses.

Show the impulse responses including actual delay through the miniDSP SHD Studio.

Show the measured and corrected responses on separate graphs. See the previous page for an example.

Display a vertical cursor line where the mouse is, together with the time delay and impulse response value at the cursor position.